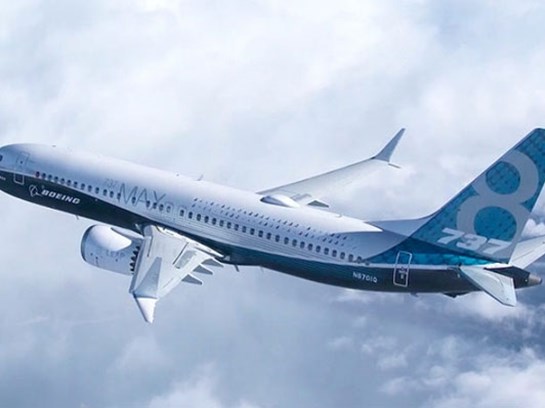 On Sunday 10 March 2019, a Boeing 737 MAX 8 aircraft crashed in Ethiopia, killing all 157 passengers on board. The airline was owned and operated by Ethiopian Airways and the plane crashed 6 minutes after take-off. The crash could have vast international implications as passengers from 35 different countries were on board the Kenya-bound flight. The countries which suffered the highest fatalities were Kenya, 32, Canada, 18, Ethiopia, 9, United States, 8, China, 8, Italy, 8, France, 7, and UK, 7.

On 29 October 2018, an aircraft owned and operated by Lion Air crashed in Indonesia, the exact same aircraft model, Boeing 737 MAX 8, killing all 189 passengers and crew.

In November 2018, Boeing was sued by a relative of one of the Lion Air passengers. As Boeing is headquartered in Chicago, the lawsuit was filed in the Circuit Court of Cook County, Illinois.

Is it a coincidence that two aircraft of the exact same model crashed shortly after take-off in the space of 5 months? The ex-Inspector General of the US Transport Department, Mary Schiavo, does not think so:

“Here we have a brand-new aircraft that’s gone down twice in a year. That rings alarm bells in the aviation industry because that just doesn’t happen.”

Before the Ethiopia crash, there were around 376 Boeing 737 MAX 8 planes in operation around the world with an approximate value of USD 40bn. Since then, Boeing has grounded its entire global fleet of Boeing 737 MAX 8 and 737 MAX 9. Boeing has another 5,000 orders for the 737 MAX series, circa 7 years’ production, with a value of USD 412bn. Analysts at Jeffries Investment Bank argued that a worst-case scenario, e.g. a software problem halting future deliveries of 737 MAX 8 planes, could cost Boeing over USD 5bn within two months.

According to Boeing, the 737 MAX series, which was introduced in 2017, is the fastest-selling aeroplane in Boeing history. Last year, Boeing generated revenues of USD 101.1bn, an 8% growth compared to 2017. Total revenue for 2019 for all aeroplane sales is forecast to be around USD 110bn, of which commercial aeroplane revenues are expected to be approximately USD 65bn in 2019, all of which is driven by higher deliveries of the 737 models. Boeing expects the 737 MAX 8 planes to account for 90% of all 737 deliveries in 2019, however, this could change. There has been a sharp drop in the share price which should be a concern for investors.

In the aftermath of the latest crash, Boeing stock lost USD 29bn of market value, dropping from USD 240bn to USD 210bn, reflecting the worries investors have about the future of the company’s prosperity.

Boeing is the world’s largest aerospace company and leading manufacturer of defence, space and security systems, accounting for over 12% of the global industry. The global aviation industry generated approximately USD 821bn in 2018 and the International Air Transport Association forecasts this to reach USD 885bn in 2019. Financial losses for Boeing could hit the global industry and have a major knock-on effect on suppliers and contractors. Perhaps this is an opportunity for other manufacturers who are waiting in the wings to take advantage of the situation? A case of one man’s loss is another man’s gain. 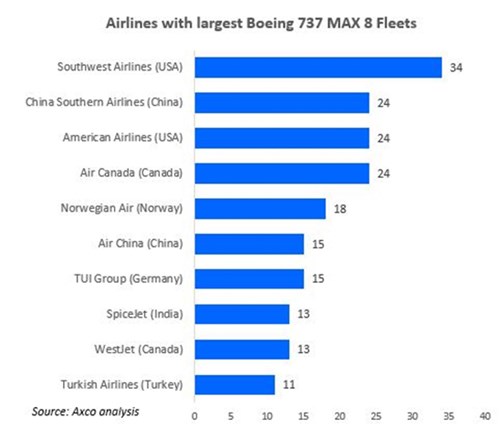 Following the crash, multiple countries immediately suspended use of Boeing’s 737 MAX 8 aircraft. At the time of writing all of Boeing 737 MAX 8 and MAX 9 active jets globally have been grounded. This will inevitably lead to significant disruption for passengers, additional costs for airlines to name but a few.

China was the first country to announce it had grounded all MAX 737 8 planes. China is Boeing’s largest market for the 737 MAX planes and the company has its only overseas manufacturing plant in Zhoushan outside of Shanghai. The majority of future deliveries have been ordered from China. With trade-talks already tense between China and the United States, this could not come at a worse time for Boeing.

The disruption to international travel was noted immediately, for example, a Norwegian Airline flight from Stockholm bound for Romania, was forced to turn back halfway through its flight following instructions it was being grounded. Initially, the United States officials argue the aircraft models were still safe to fly and were distancing themselves from worldwide decisions to ground the planes. Critics argued that this could have had something to do with the current US administration apparent close links to Boeing. On Wednesday 13 March 2019, President Trump issued a statement saying:

Chubb is the lead underwriter for the Ethiopian Airlines account and early loss estimates have been put at between USD 50mn to USD 60mn for the aircraft itself. Aviation insurance covers both the aircraft, third party legal liability, crew personal accident, baggage etc.  Life insurance for the passengers could add substantially to the loss figure, particularly if the relatives of passengers decide to take legal action. As eight of the passengers were from the United States, this is highly likely. If the plane is proven to be faulty, Boeing’s insurers could also face large losses.

It is still early days, and investigations could go on for many months or even years, but one thing is certain that this has been a big blow for Boeing, the global aviation industry, but above all a catastrophic incident for all the victims and their families.

For more information on statistics on aviation industries and airlines around the world, please contact axco@axcoinfo.com.