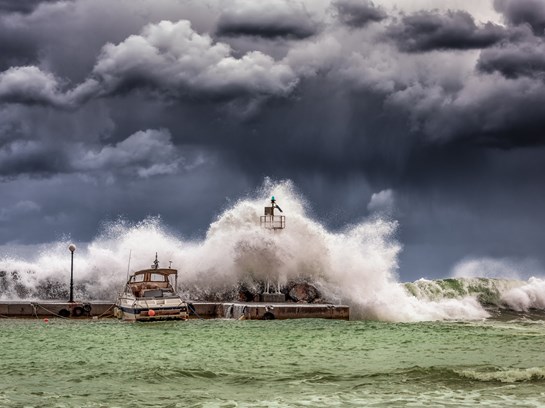 Each passing year brings a renewed expectation of climate risks, but 2021 could well be the year that really crystallises national vulnerabilities. Climate change is a multiplier for a range of risks, and we expect storms of increasing number and severity, alongside a continuing La Niña episode, to layer over the COVID-19 pandemic that has already stretched the resilience of many countries.

The effect of these climate-related disasters is to undermine development; they may even contribute to political crises and other hazards. As COVID-19 has exposed inadequate disaster preparation and management in many countries, it has detracted from the long-term planning and social safety nets that help to build resilience to disasters. According to a Red Cross survey, there had been 92 extreme weather events in countries experiencing the pandemic by September 2020, directly affecting 51.6 million people and piling pressure on overwhelmed governments.

The pandemic has particularly battered the economies of small island developing states, already among the most vulnerable to natural disasters and climate change, as most are dependent on international tourism. Many have successfully suppressed the spread of the virus, helped by their relative isolation. But as the second wave has surged in major markets in North America and Europe, governments have faced a difficult balancing act between admitting tourists and shouldering the costs and lost income of another industry shutdown. No matter their choice, tourists’ shrunken incomes and fears of infection are likely to keep arrivals below the record pre-virus levels, even if vaccinations programmes gain traction. The IMF’s October 2020 forecast suggested that these countries will suffer the worst annual contractions in GDP among countries not affected by war or civil conflict, with Fiji expected to record a 21.0% contraction, Aruba 19.7% and the Maldives 18.6%.

Caribbean territories in particular are suffering precipitous declines due to their reliance on tourism receipts to support jobs and revenues. The Caribbean’s small but highly concentrated populations amplify the region’s natural vulnerability to earthquakes and hurricanes; natural disasters have inflicted average damage costs amounting to two-thirds of economic growth per year from 1980 to 2015. Unlike more diversified tourist destinations in Southeast Asia and southern Europe, the Caribbean has few options to mitigate these losses. The established route of developing offshore financial services faces increasing pressure from international regulatory scrutiny, and the industry is already mature in markets across the region. Many territories are also highly indebted after a decade of weak growth and were already undergoing fiscal adjustment programmes that were crimping economic activity before 2020. Elevated levels of public debt and structurally high current account deficits present obstacles to financing response measures to help absorb shocks, especially for those countries and territories classified as too wealthy for concessional financing and multilateral support measures.

Without ready financing or tourism dollars, the region is poorly equipped to deal with the increasing intensity and frequency of hurricanes, as climate change threatens to place an ever-greater handicap on development and economic stability in the region. 2020 was the busiest season for named tropical storms in the North Atlantic on record. With the recent onset of moderate-to-strong La Niña conditions increasing the probability of a glut of damaging storms, the upcoming season could well be worse. The whole region will likely be affected, but the Bahamas and Puerto Rico, which continue to reel from Hurricanes Dorian and Maria, are particularly vulnerable.

Further afield, the cyclical La Niña phenomenon is also associated with weather patterns that can exacerbate extreme weather elsewhere. Hotter and drier weather in the southern areas of the US risks an even more intense wildfire season than in 2020. For Australia and Oceania, it tends to bring cooler and wetter weather, increasing the prospect of storms and floods. In the Horn of Africa, lower rainfall for regions ravaged by locust swarms heightens the risk of drought and famine, potentially destabilising fraught political situations in Ethiopia and Somalia. In Argentina, there are early signs of drought that may reduce the production of soybeans, its major cash crop, affecting efforts to manage the country’s sliding foreign reserves ahead of debt renegotiations with the IMF. While the impacts on Southern Africa are historically more limited, droughts and cyclones in recent years have left the region even more vulnerable to even small shocks.

Across the world, climate change is only increasing vulnerabilities year by year. Risks of devastating storms, fires and failed crops in the short term undergird long term changes that could lead to demographic shifts and secular changes in productivity and regional security. This year, those immediate risks will materialise in a world made much more vulnerable by COVID-19, with impatient and frustrated populations and governments stretched by the costs associated with the pandemic. There’s still no conclusive evidence that climate change can bring down governments. Yet 2021 could be the year that adverse weather contributes to a perfect storm for some.