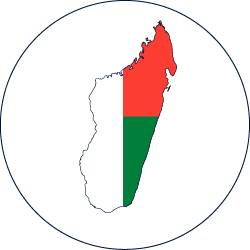 Information for Madagascar can be seen in:

The island of Madagascar was inhabited around 500 BC by migrants from south-east Asia. The first Europeans landed there around 1500. By 1643 France had established a settlement at Fort Dauphin, and in 1665 annexed the island under the name of L'Ile Dauphine. During most of the 19th century the French and the English vied for control of the island. Madagascar was declared a French colony in 1896 but became independent in 1960.

Under the Emergent Madagascar Initiative (IEM) strategy, the government aims to attract investment for the development of the energy, mining and agriculture sectors, while encouraging a larger role for the private sector. This will necessitate substantial improvements in the country's business atmosphere.