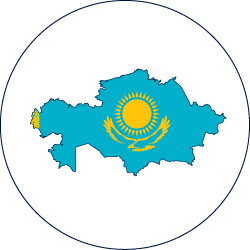 Information for Kazakhstan can be seen in:

The Republic of Kazakhstan has a land area of 2,717,300 square kilometres, making it the ninth largest country in the world, roughly the size of western Europe. Present-day Kazakhstan formed an important section of the Great Silk Road, which for centuries took traders across Central Asia to the Middle East, and it is still an important staging post for trade.

Kazakhstan possesses enormous hydrocarbon reserves, and plentiful supplies of other minerals and metals. It also has a large agricultural sector featuring livestock and grain. Kazakhstan's industrial sector rests on the extraction and processing of natural resources, especially oil and natural gas.

Gross premium income for non-life inclusive of personal accident and healthcare amounted to KZT 303.97bn, which could be considered a medium-sized emerging market. As in some other post-Soviet economies, insurance culture and product penetration remain quite low, especially in the consumer segment, but inclusive of personal accident and healthcare the market size is now almost USD 1bn making it by far the largest of the former soviet republics in the Central Asia and Caucasus region.