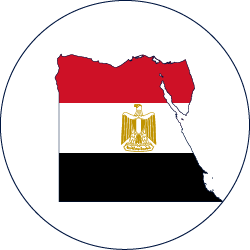 Information for Egypt can be seen in:

With archaeological signs of civilisations dating back over 6,000 years, native dynasties ruled for almost 4,000 before they were succeeded by various foreign occupations, some lasting centuries, until Egypt declared independence in 1922, becoming a republic in 1953. About 95% of the country is desert and most of the population reside in the valley of the River Nile, which bisects the country from north to south for a distance of 1,000 miles. Egypt borders the Mediterranean Sea in the north, the Red Sea and Israel to the east, Sudan to the south, and Libya to the west. There is a low to moderate earthquake risk in the country and tremors of a magnitude of 5.0 to 6.0 on the Richter scale occur every few years.

Non-admitted insurance is forbidden by law with some exceptions. No company may write business in Egypt without authorisation and no property or liability risk situated in Egypt may be placed directly outside the country unless permission to do so has been obtained from the supervisory authorities. Reinsurance may be placed overseas but only with approved reinsurers. The only compulsory tariff is motor third-party liability for bodily injury insurance.