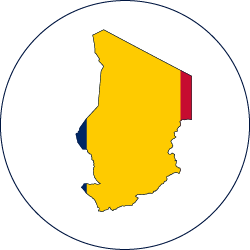 Information for Chad can be seen in:

The Republic of Chad, the fifth largest country on the African continent, is a landlocked country bordering Libya to the north, Sudan to the east, the , Central African Republic to the south, Cameroon and Niger, southwest,  and Nigeria  to the west The country takes its name from Lake Chad, the largest body of water in the Sahel region.

Chad is a CIMA country. Its non-life and insured life and pensions markets are regulated by the the supranational regulator, the Regional Control Commission for Insurance (CRCA), set up as required by CIMA legislation, is considered effective and has closed down failing insurers

The Chadian P&C market is small relative to others in the region with low penetration at only 0.13% of GDP and low maturity reflecting the overall poverty of much of the population and the lack of insurance awareness and understanding. Gross premiums declined in 2016 and 2017 due to a deteriorating economic situation (driven largely by the drop in the price of oil) and the impact of the government's austerity programme. Chad is one of the smallest life insurance markets in the CIMA zone with insurance penetration well behind that of other countries in the region.