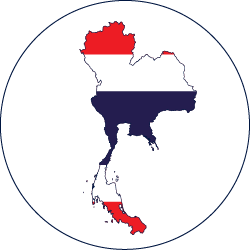 Information for Thailand can be seen in:

Thailand has been a constitutional monarchy since 1932. The king is the ceremonial head of state with executive power vested in the prime minister and the cabinet. It has been an independent kingdom since the 13th century. Thailand's economy was traditionally based on agricultural exports but in recent decades has been transformed into one of the most diverse in south-east Asia. Key drivers are the industrial and services sectors.

Thailand has little exposure to natural perils other than flood, which occurs every year, and tsunami

Non-life gross premium income for 2018 was THB 231.99bn, including personal accident and healthcare business (which is also written in the life sector) and local facultative reinsurance. This was an increase of 5.65% compared to 2017. Motor was the largest class of business, accounting for 58.7% of the total non-life account, with PA/healthcare second at 17.6%.

The non-life insurance sector in Thailand is crowded, in 2017 there were 58 companies writing non-life business,