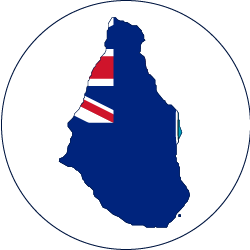 Information for Montserrat can be seen in:

British Overseas Territory in the Caribbean. Montserrat has heavy volcanic activity, from which an exlusion zone encompassing the southern half of the island has been imposed. The island's de juro Capital city, Plymouth was destroyed by volcanic activity, so a de facto city, Brades, holds the centre of government and businesses while a new town and port, Little Bay, is being constructed.