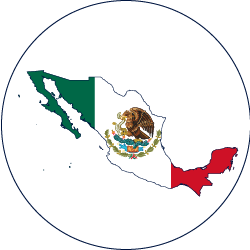 Information for Mexico can be seen in:

Before the European discovery of the Americas the great pre-Columbian civilisations including the Mayan and Aztec flourished in Mexico. Following the arrival of the Spaniards in 1519 Mexico became part of the Spanish Empire. Independence was declared in 1821 and the country became a republic in 1823. The first Mexican insurance company, Seguros Maritimos de Nueva Espana, was formed1789.

In 2019, the non-life insurance market (excluding PA and health business) grew by 11.5%, this reflects the renewal of the market's largest account, PEMEX the state-owned petroleum company, which is typically renewed for a two-year period. Total insurance premium income was MXN 594.98bn of which life and pensions formed some 45.21%, PA and healthcare 15.46% and non-life business 39.32%. Motor remained the largest class, representing 49.2% of non-life premiums excluding personal accident and healthcare, followed by property (20.3%).

In November 2020 the Mexican Association of Insurance Institutions (AMIS) announced that the insurance sector was forecasting an estimated overall reduction of 3.1% in premium volumes by the end of 2020 as a consequence of the COVID-19 pandemic. It also reported that sales of motor and homeowners' policies had fallen by about 60% as policyholders focused their attention on purchase of medical expenses insurance.