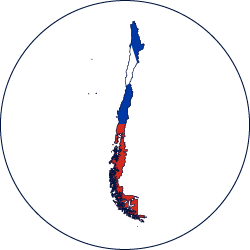 Information for Chile can be seen in:

One of the wealthiest countries in South America, in recent years, Chile's economy appeared to overcome its two most serious problems: high inflation and a volatile pattern of economic growth. However, this is tempered by countrywide protests in October 2019, arising from general dissatisfaction with the Pinera administration but sparked primarily by increases in metro prices, leading to at least 18 deaths, thousands of arrests, curfews and the threat of a general strike. The disruption had a significant negative impact on the country's GDP for 2019.

The Chilean P&C insurance sector remains a stable, deregulated, emerging market that offers attractive potential for growth and profitability. Various foreign players are said to view it as a convenient entry point to develop operations in Latin America. There has been considerable evidence of this in recent years.

The life market is mature, first established in the 1820s. Penetration is the highest in the region by a significant percentage. Both size and penetration are due to the mandatory contributory capitalisation system, which collects and distributes funds for the social security system, including risk assurances, and has resulted in a sizeable annuities portfolio.